I originally had big plans for costumes this year.  The girls were going to be Flora, Fauna, and Merryweather, the 3 good fairies from Sleeping Beauty.  It would have been so cute and of course Paige would have been Merryweather, the chubby, blue, fairy.  After my original fabric purchase at Goodwill my mom and I realized that they still needed, capes, and hats and that the dresses had to be sewn completely from scratch.....x 3.  We decided (after a trip to Joann) that these costumes were not only going to be a huge hassle and time consuming but also very costly.  So right there and then we decided (upon Claire's request) to go with the Disney fairies instead. 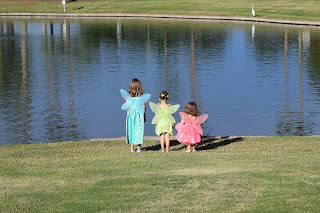 I already had Paige's costume, Claire's and Joy's we found at Goodwill for $6 and $5 and the wings are from the dollar store.  Yes!  My kind of costumes!  Of course each costume needed a little help to fit better and make it a little more special but I spent about 40 minutes on the 3 combined. 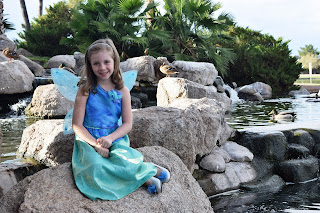 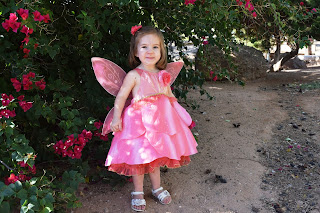 and of course, Tinkerbell - the Tinker Fairy. 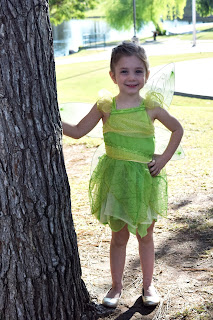 We had a lot of fun on this photo shoot.  However, as we were getting ready, Joy decided to touch the curling iron to see if it was on. So she had a big white blister on her finger and of course her poor finger burned like crazy for the next 3 hours.  We were already in too deep to call off the picture session so we gave her the only thing from my mom's freezer that was easy to hold and would stay cold long enough - a  frozen sausage wrapped in foil.  (after we got to the park we realized we could have/should have cut it so it was....smaller.  This is why Joy's hand is behind something in most pictures. 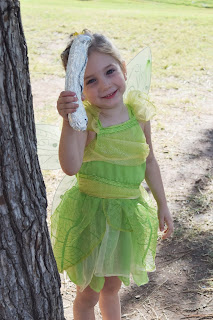 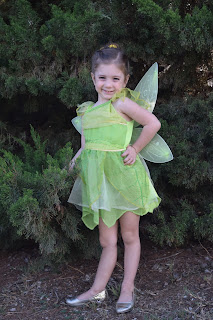 Paige reenacting the Little House on The Prairie intro. 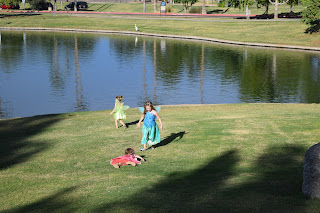 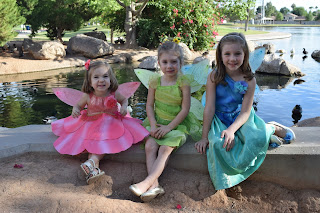 Laughing at Paige in between shots. 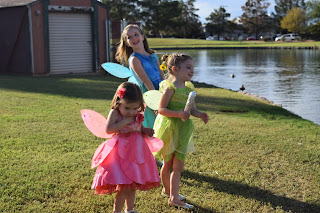 Luckily, these girls are just as happy (if not more) with the switch in costumes and I have enjoyed a stress-free costume season. 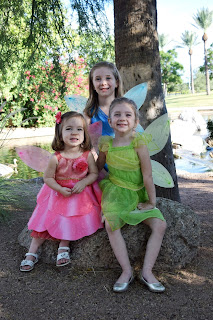