We have been swimming. 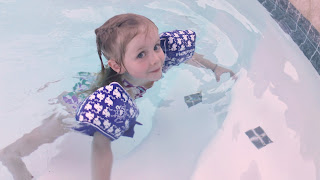 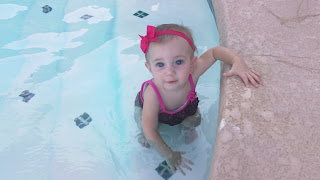 Remember that I had previously mentioned that we put Claire in the City of Phoenix swim class?  Well, it was fantastic for her!

After I signed her up I knew they would not let her stay in the class because of her extreme anxiety and would label her as "unteachable", so I began seriously working with her on getting used to getting her face wet.  After repeated dunking, screaming, crying, shaking and choking, I realized the root of the problem was that she didn't know how to hold her breath.  Everytime she went under, her mouth and eyes opened wider than anyone would think possible and she would inhale water.

I had her practice holding her breath in the tub and in our little pool in our backyard.  I had to physically force her head in the water and I would count to 3 and then let her up.  She eventually figured it out.  ( I was unaware that this is something that had to be taught but that's Claire for you) 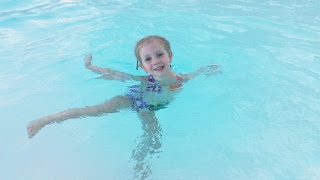 A few days later, we went to a graduation party and the people had a spa attached to the pool.  Claire thought it was a pool "for little girls" and was very confident in it.  All of a sudden she said "Watch this Mama!", held her breathe and went completely underwater.  I almost fainted!  I was so proud and surprised!  She kept doing it and decided it was fun but was still nervous.  The following day was her first swim class and I was so anxious to see how she would do.  She did great! 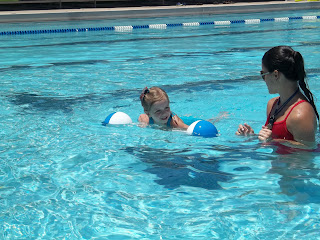 Still a little apprehensive but amazingly willing to try new things.  She was so proud of herself and kept commenting on how brave she was. 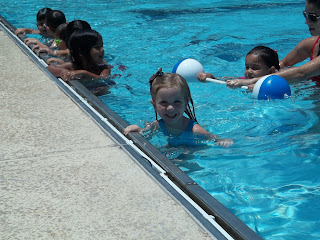 She even went down the big slide all by herself the first day but after experiencing how turbulent the water was at the bottom she opted to ride with the teacher the next time. 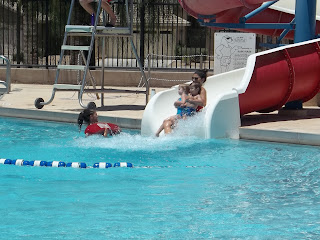 Last week we went to a public pool with my mom and there was a little boy there who was 8 years old.  She kept telling him to "watch this!"  She would pop under water for a brief second and then pop back up.  He was unimpressed and would say "Watch THIS" and dive underwater to get a dive toy and swim a few feet under water.  Peer pressure can be a wonderful thing.  She tried swimming underwater and grew more confident in her abilites.  By the end of the day she was jumping off the side of the pool into the shallow water and would ride on my back and we would go underwater together for a short distance.

The real miracle came when my mom bought her a swim mask that covers her eyes and nose.  She immediately loved it and started swimming underwater.  We were blown away! It was a sight I thought we would never see. She has been practicing and practicing and yesterday she made her greatest accomplishment.  Watch this!  (the pool is 8 feet deep and she knows it)

No floaties, no ring, no screaming or crying.  She can officially swim!  She will not drown if she falls in a pool!  I am so extremely proud of her!  It is so much more fun to swim now.  "I can go everywhere!"  She exclaimed.

She is currently working in doing a flip in the water and doing fancy jumps off the diving board! She even tried diving last night but each try resulted in a face/belly flop.


What a transformation!   We are so proud of our new little fish!

I hate when I go for weeks without blogging.  As always it's because we've been busy.  Claire's birthday celebrations, swim class, and VBS all kept me going from one thing to the next. Josh left for kids camp last Sunday so we (the girls and I).  Went to my parents' house for the week. We've had a great time!  It is so nice to have outside space to play.
A few days ago, Joy had her first ride in the Little Tikes coupe. 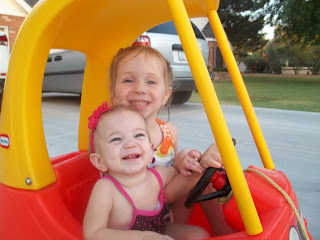 It was a tight squeeze for both of them in there so Claire got on her scooter,

and we pulled the car with a rope. 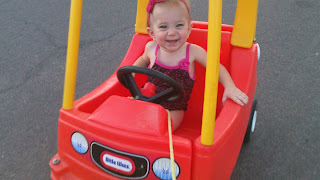 You can see the excitment and glee on her little face. 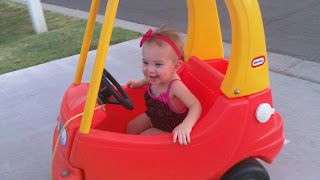 This video is very long  but I don't have the time or patience to
edit it so watch it for as long as you can stand.

That went on for quite awhile and Joy eventually got tired and wanted out. 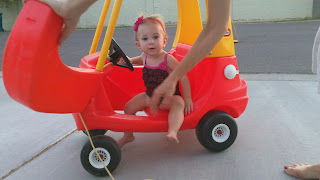 She started pushing the car all over the driveway and street. 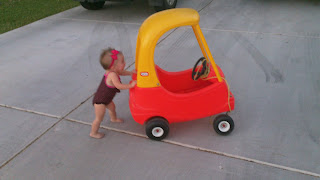 We all jumped in the pool afterward; both girls were beet red!

It was a fun and precious evening! 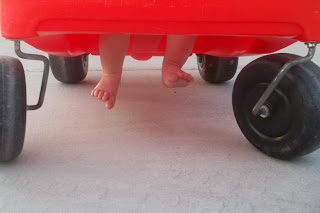 Posted by Kathleen at 4:29 PM No comments: