This week Michelle came down to spend the day with cousins and Nana.  We went to our favorite park because we thought T.J. would enjoy the splash pad.  It won't be much longer that we'll be able to go to parks! 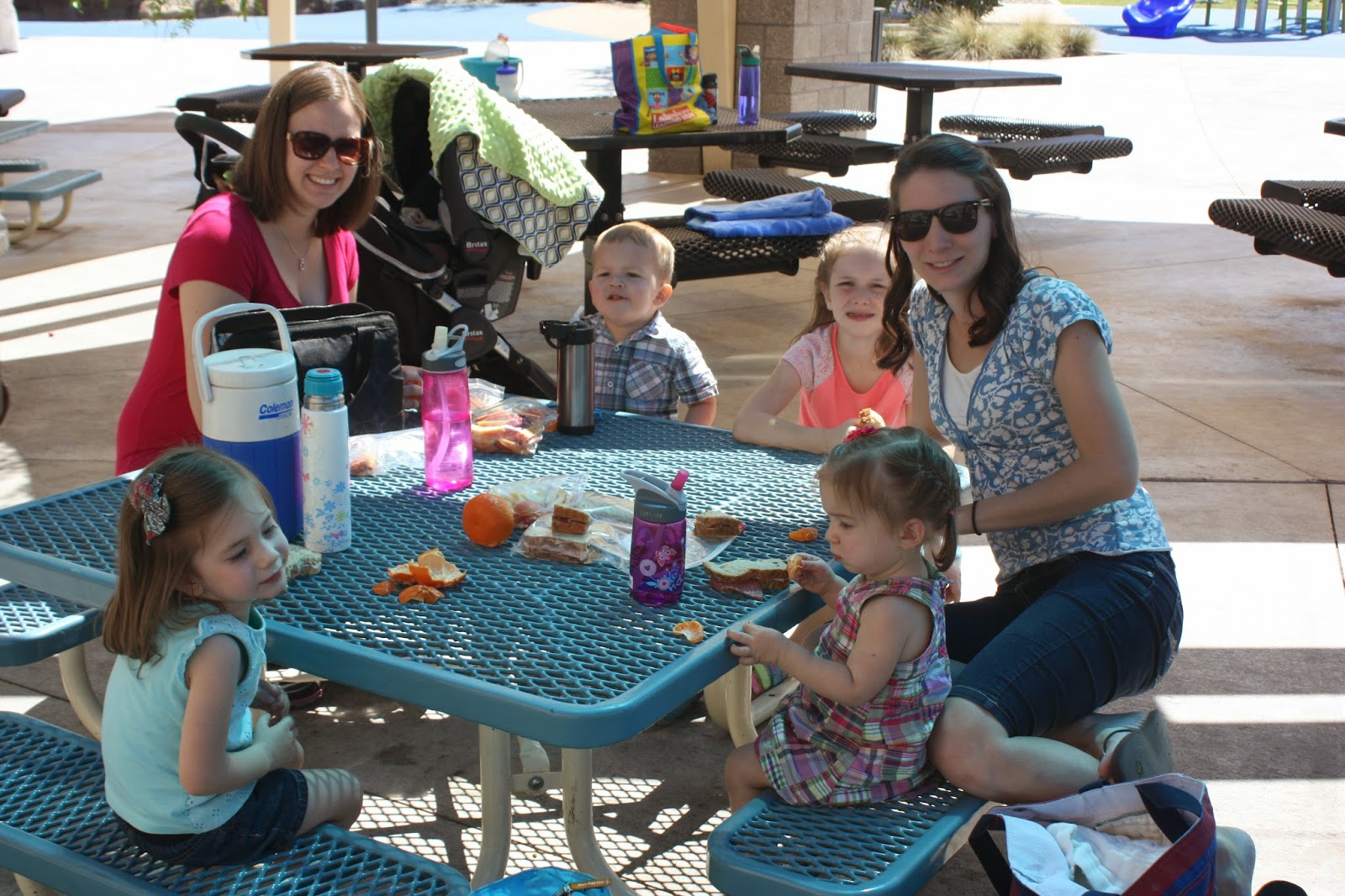 We ate lunch which was interrupted by multiple bathroom trips and then hit the splash pad. 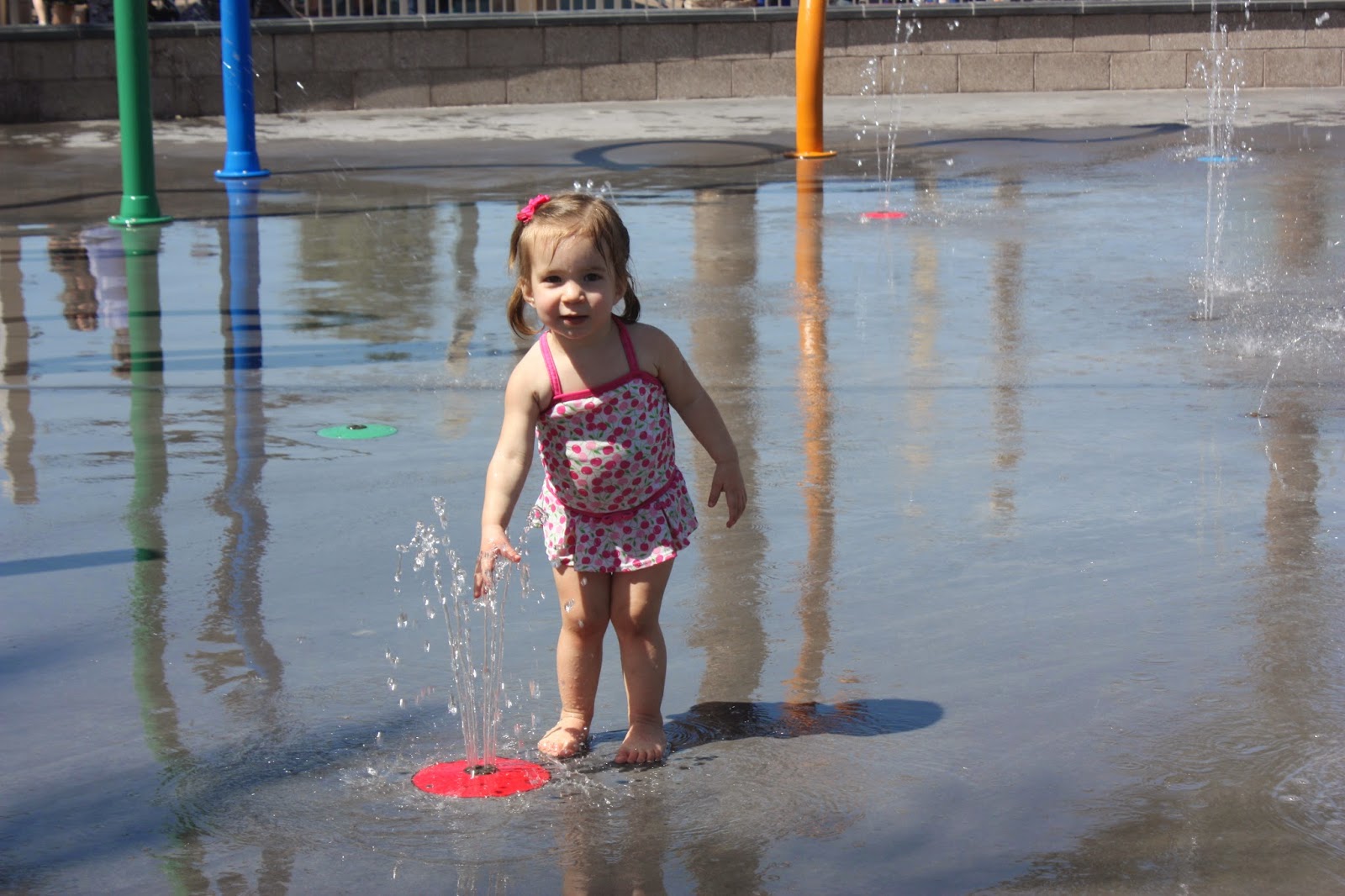 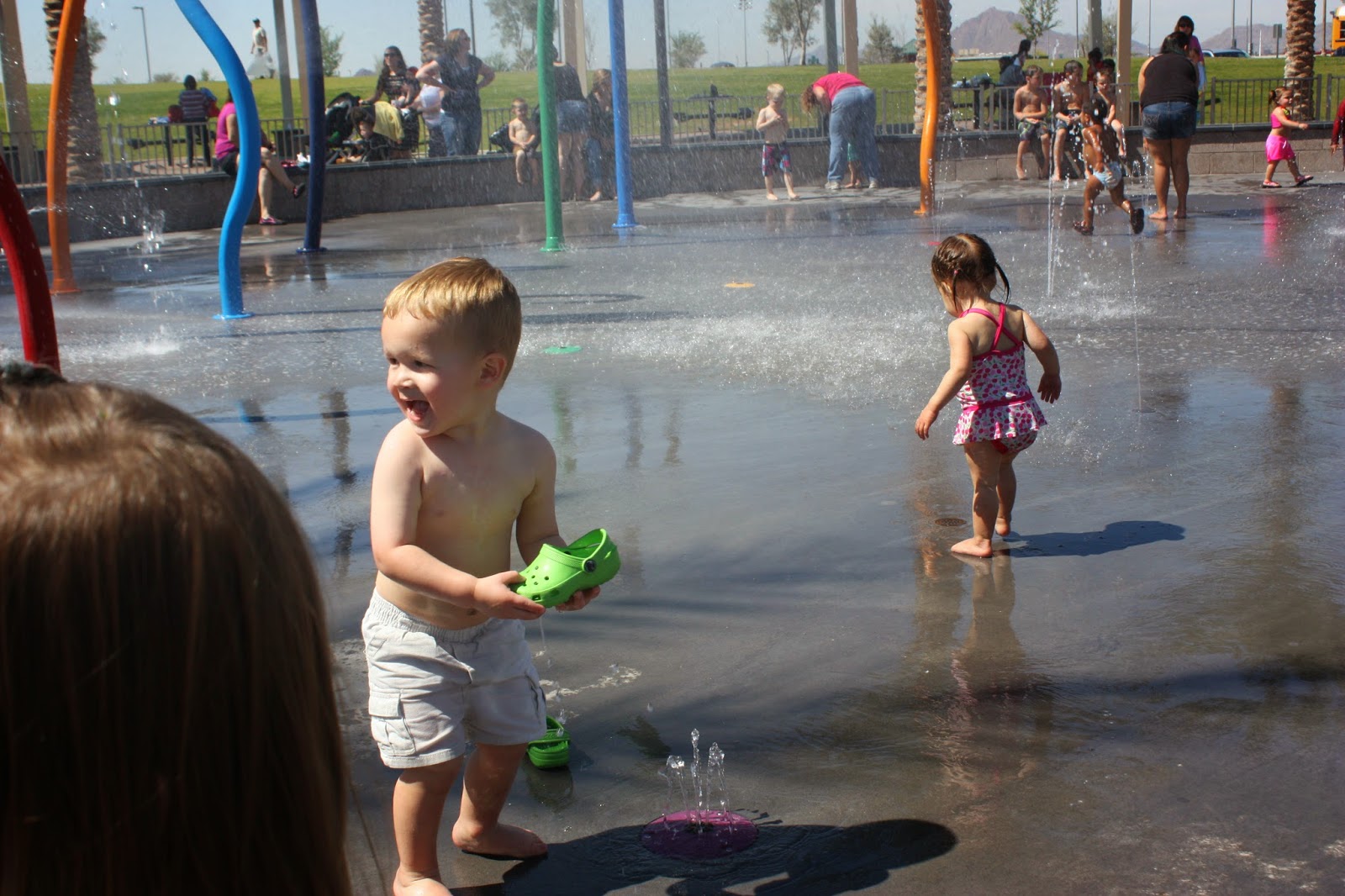 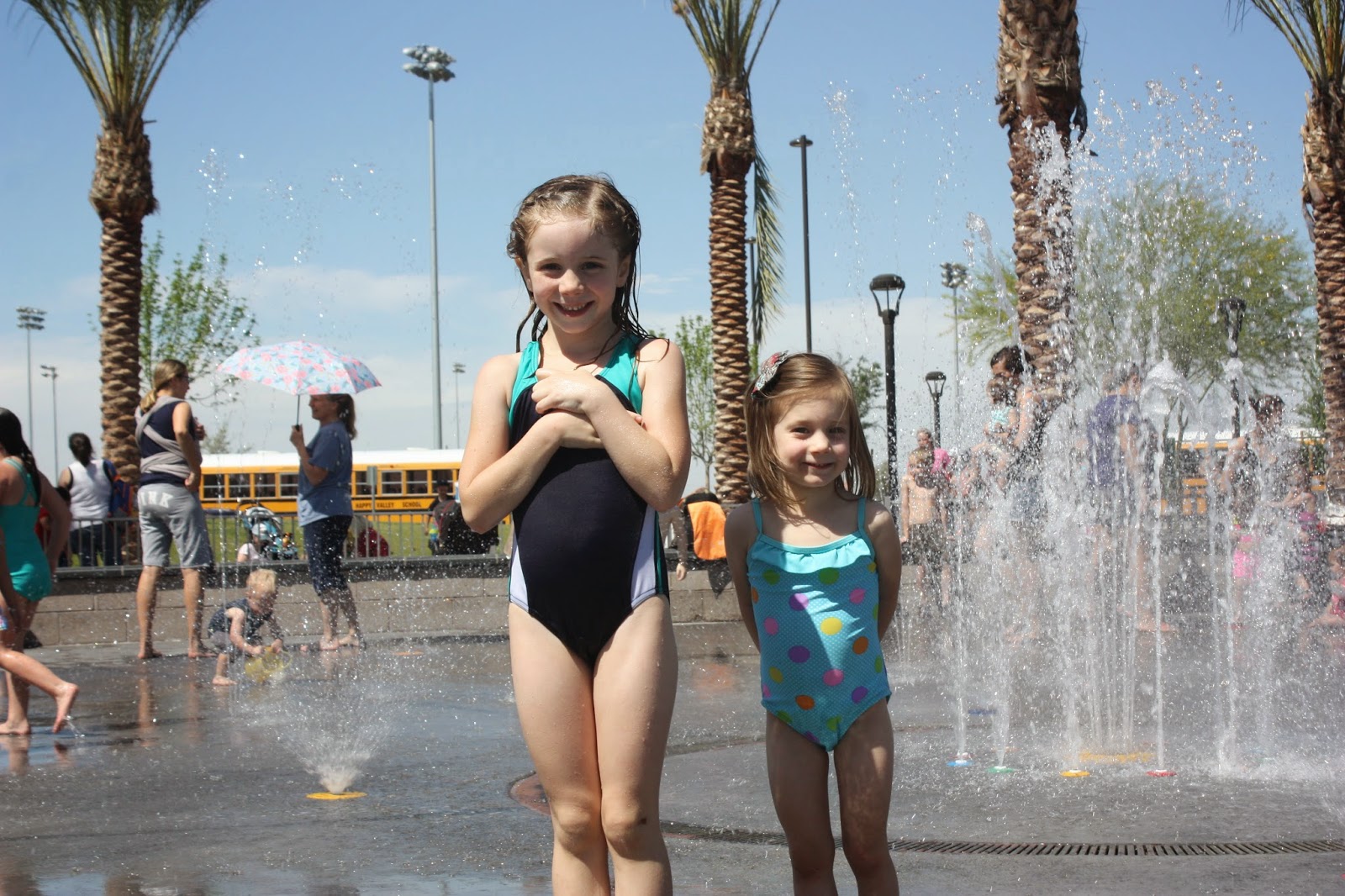 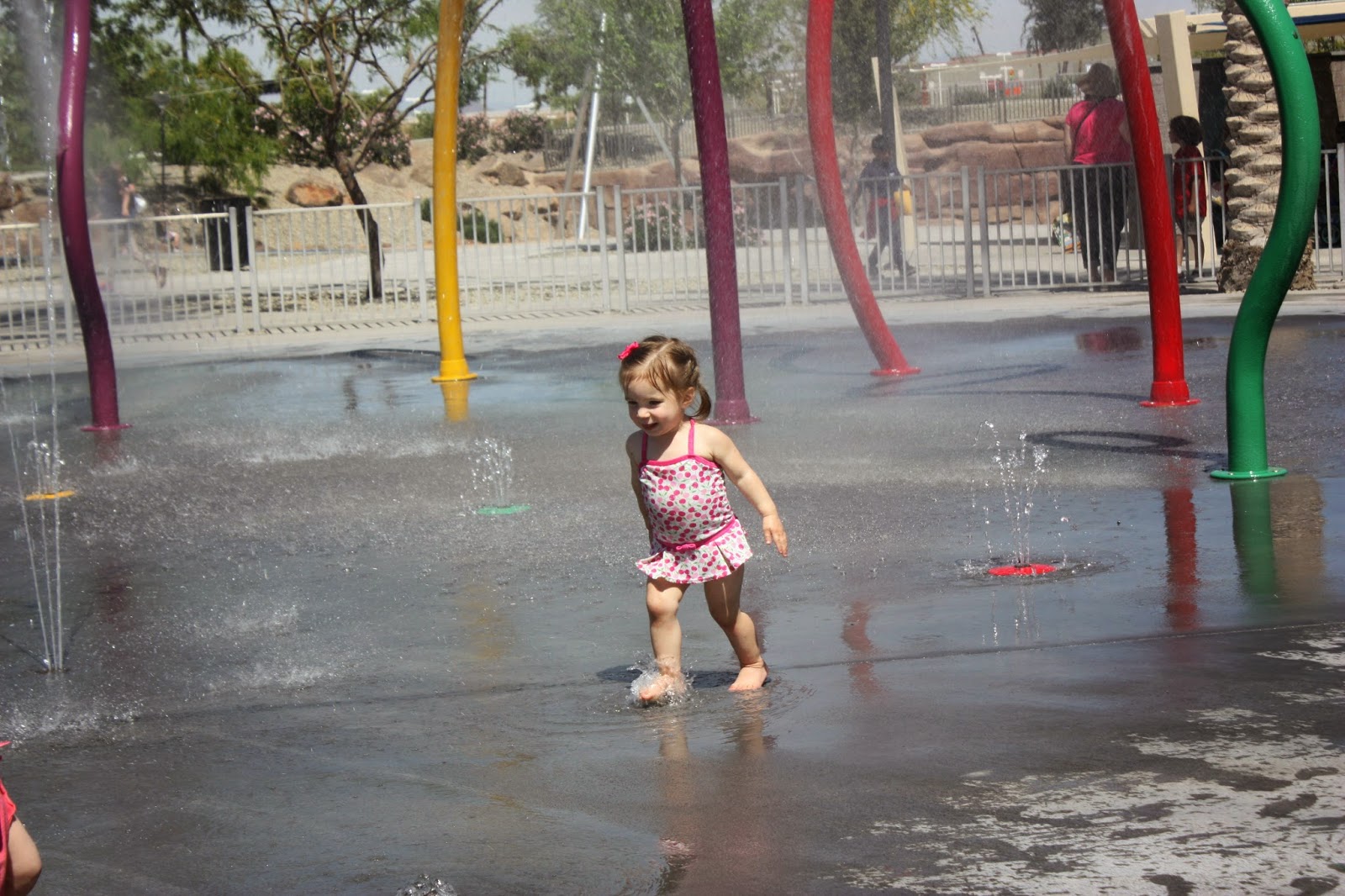 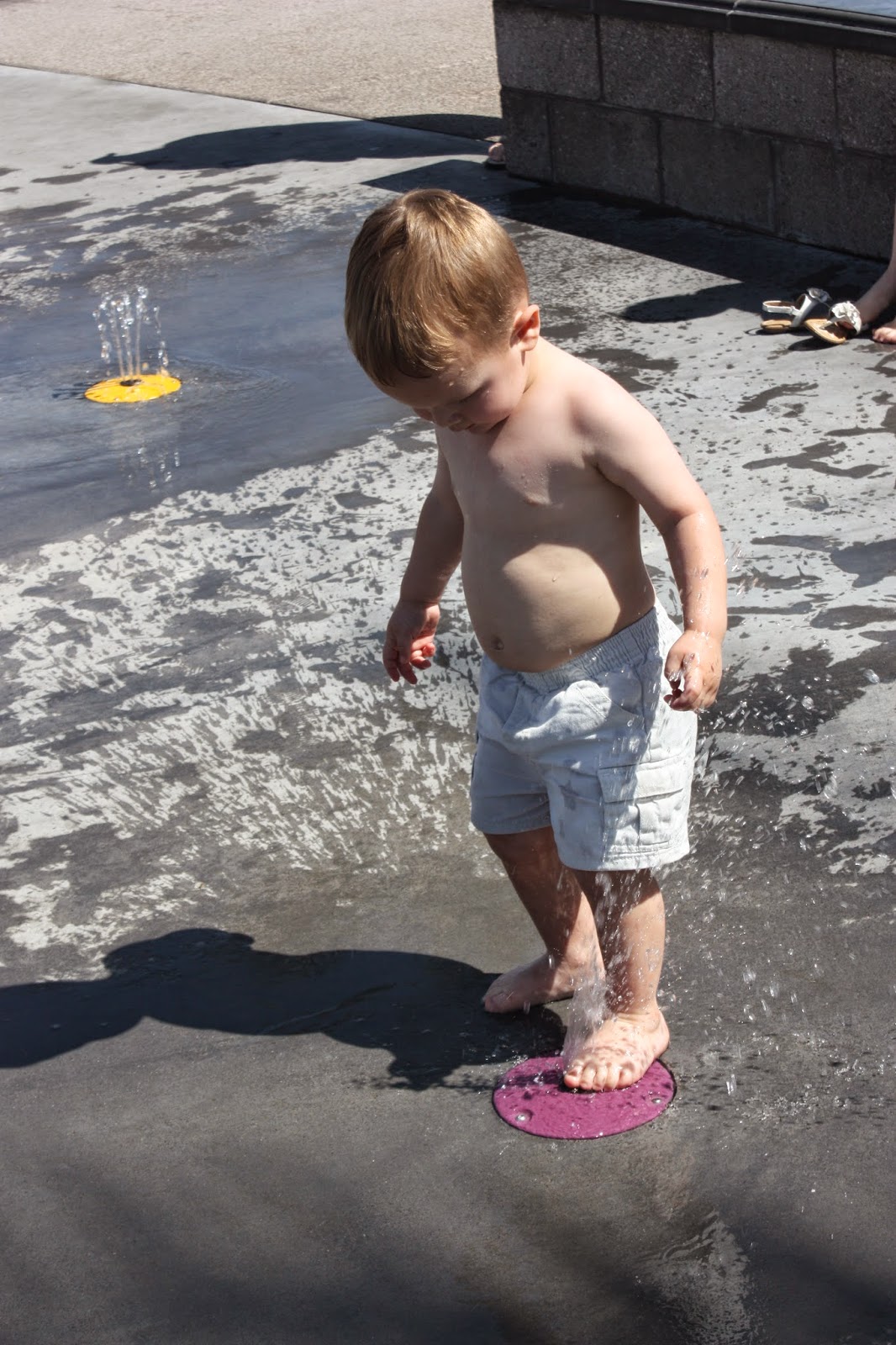 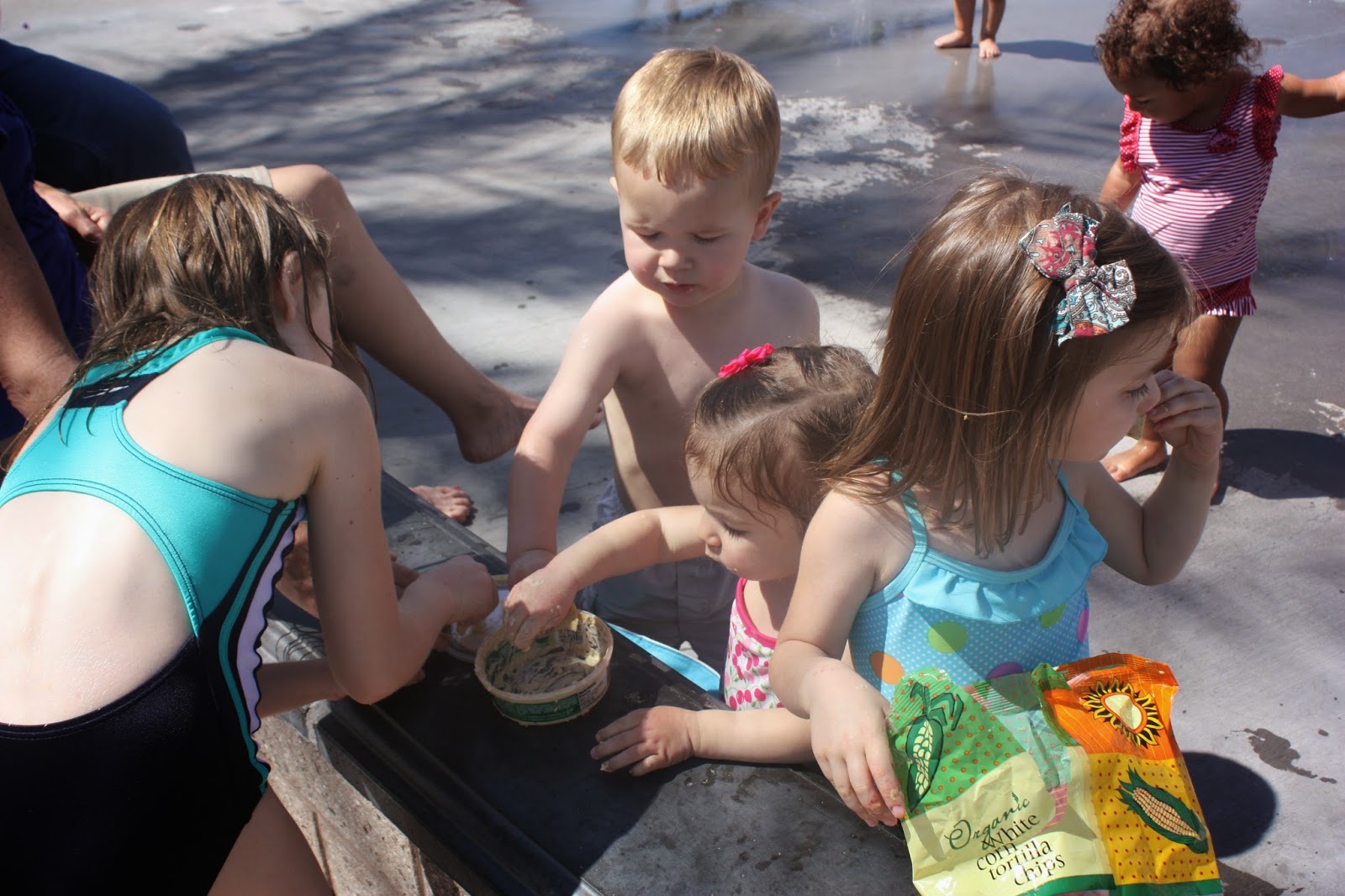 Paige loves her some hummus. 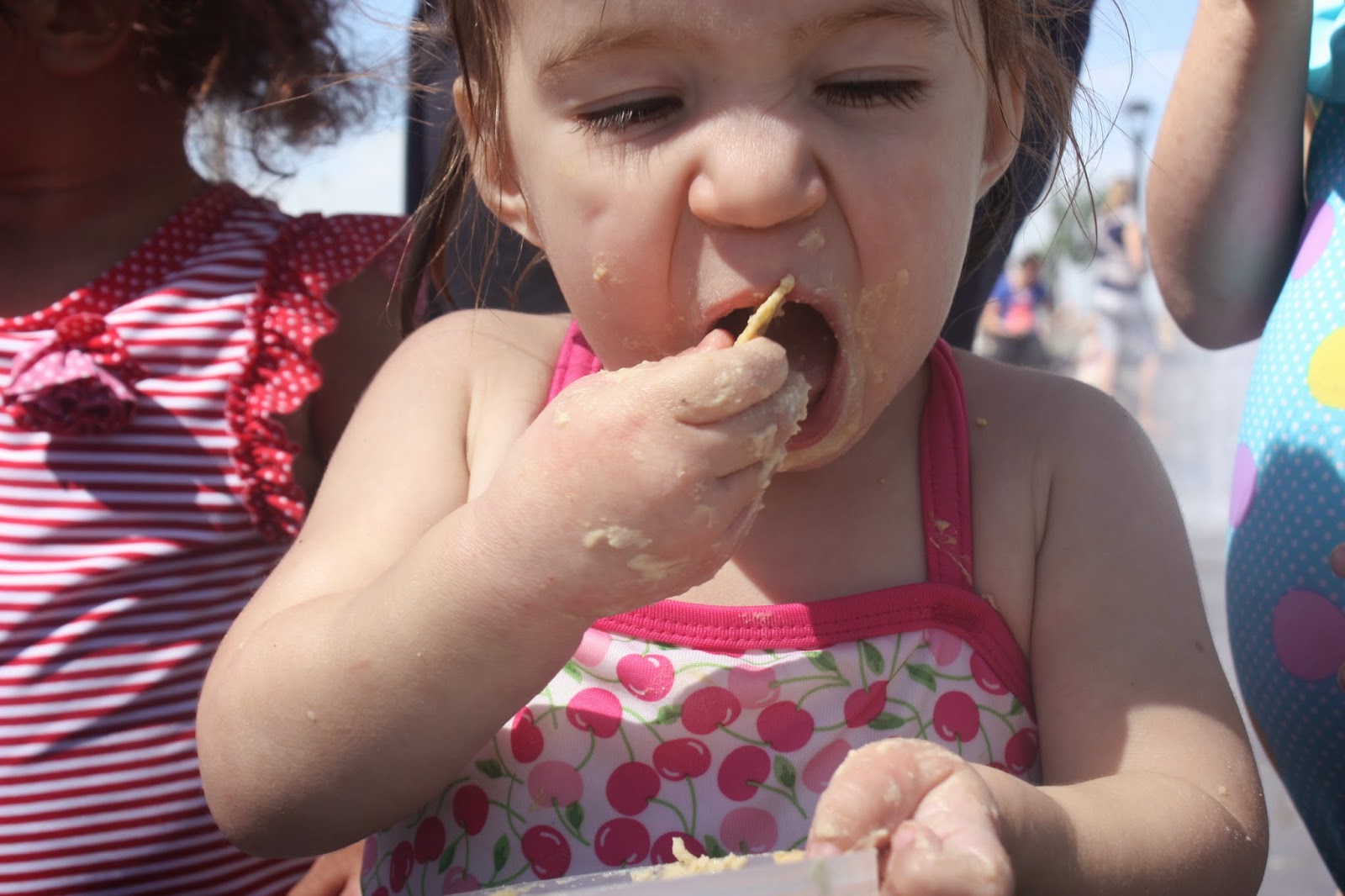 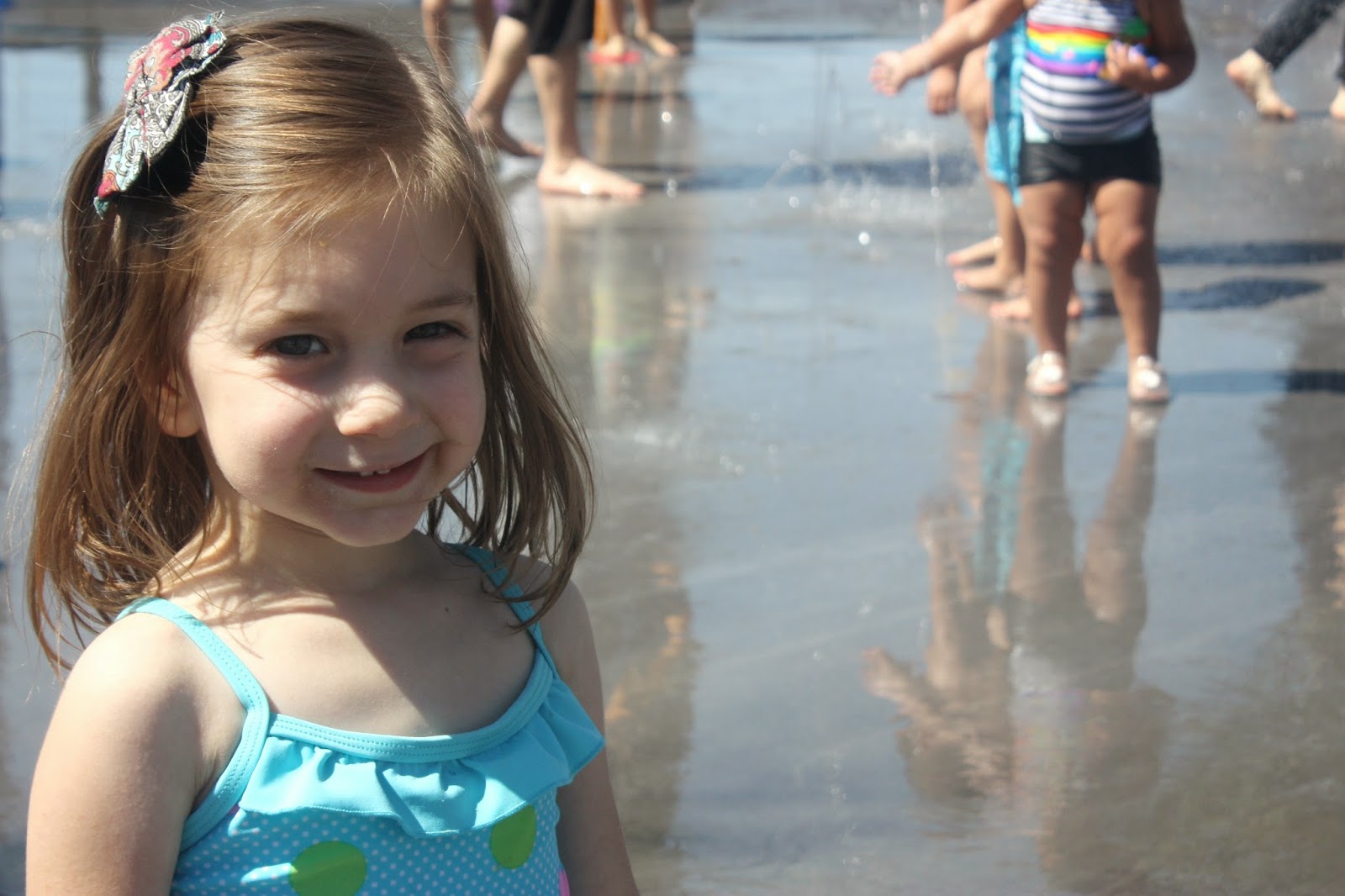 The kids tired of the water pretty quickly, so we played, 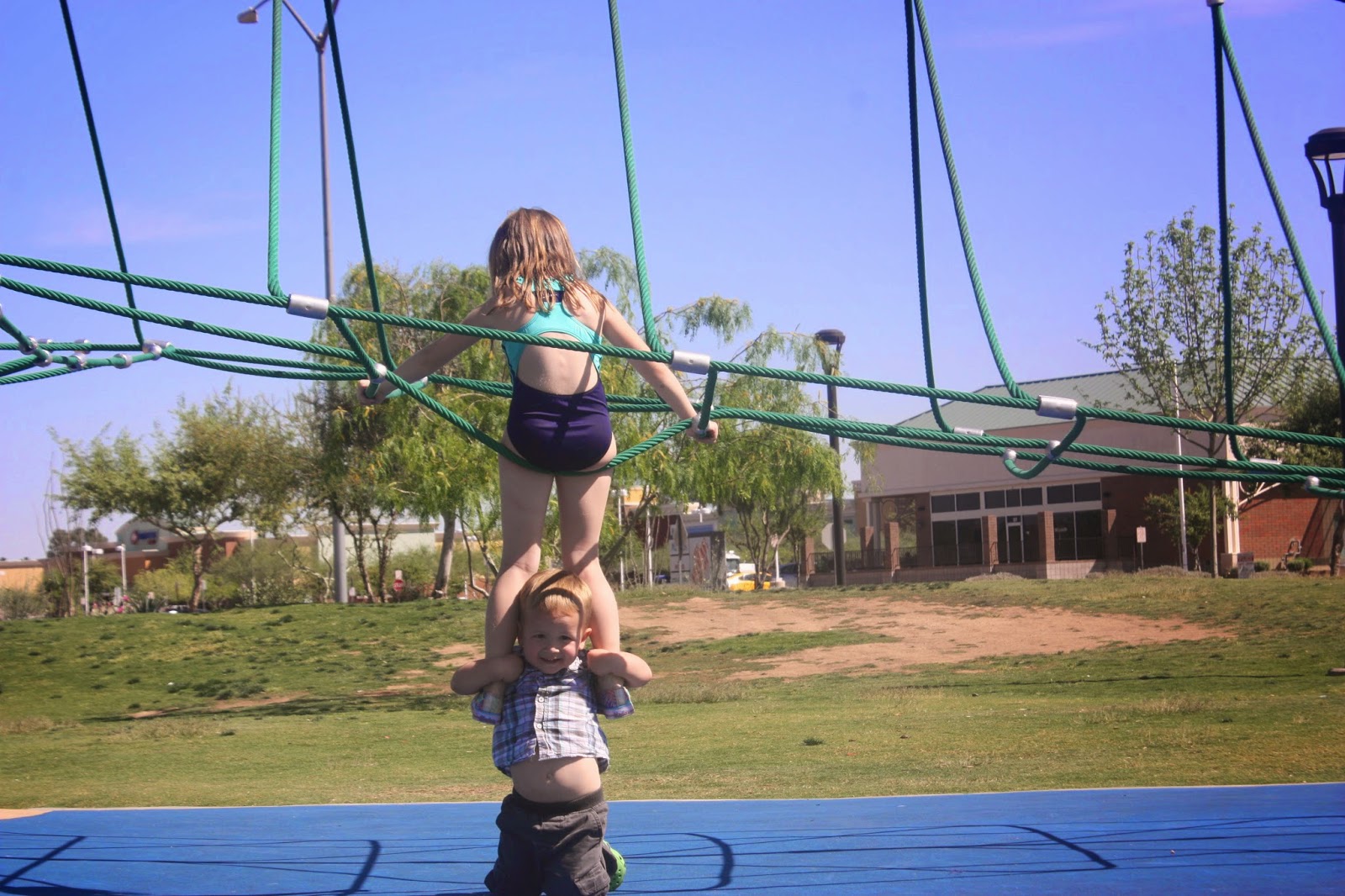 went to the bathroom some more, 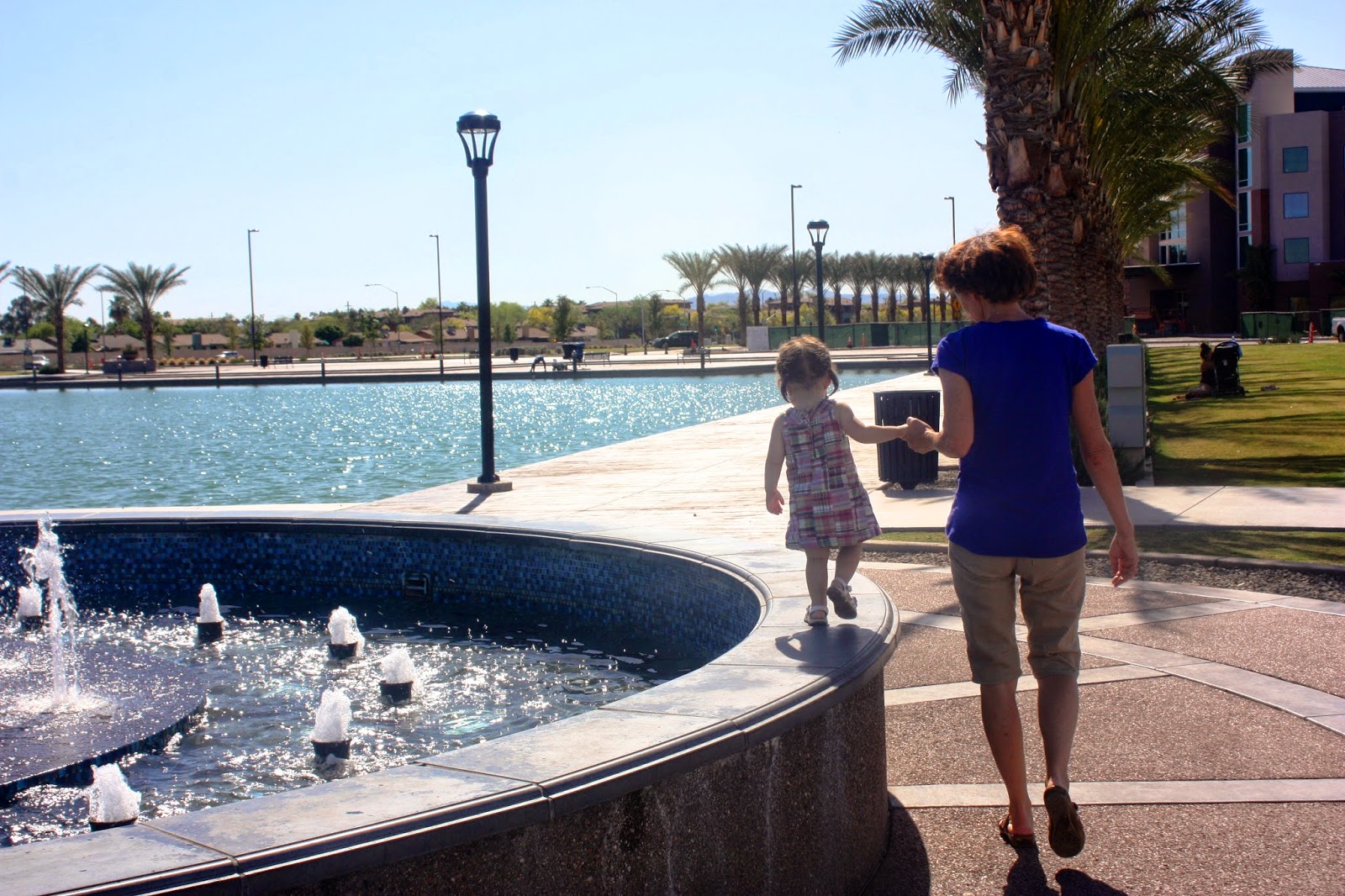 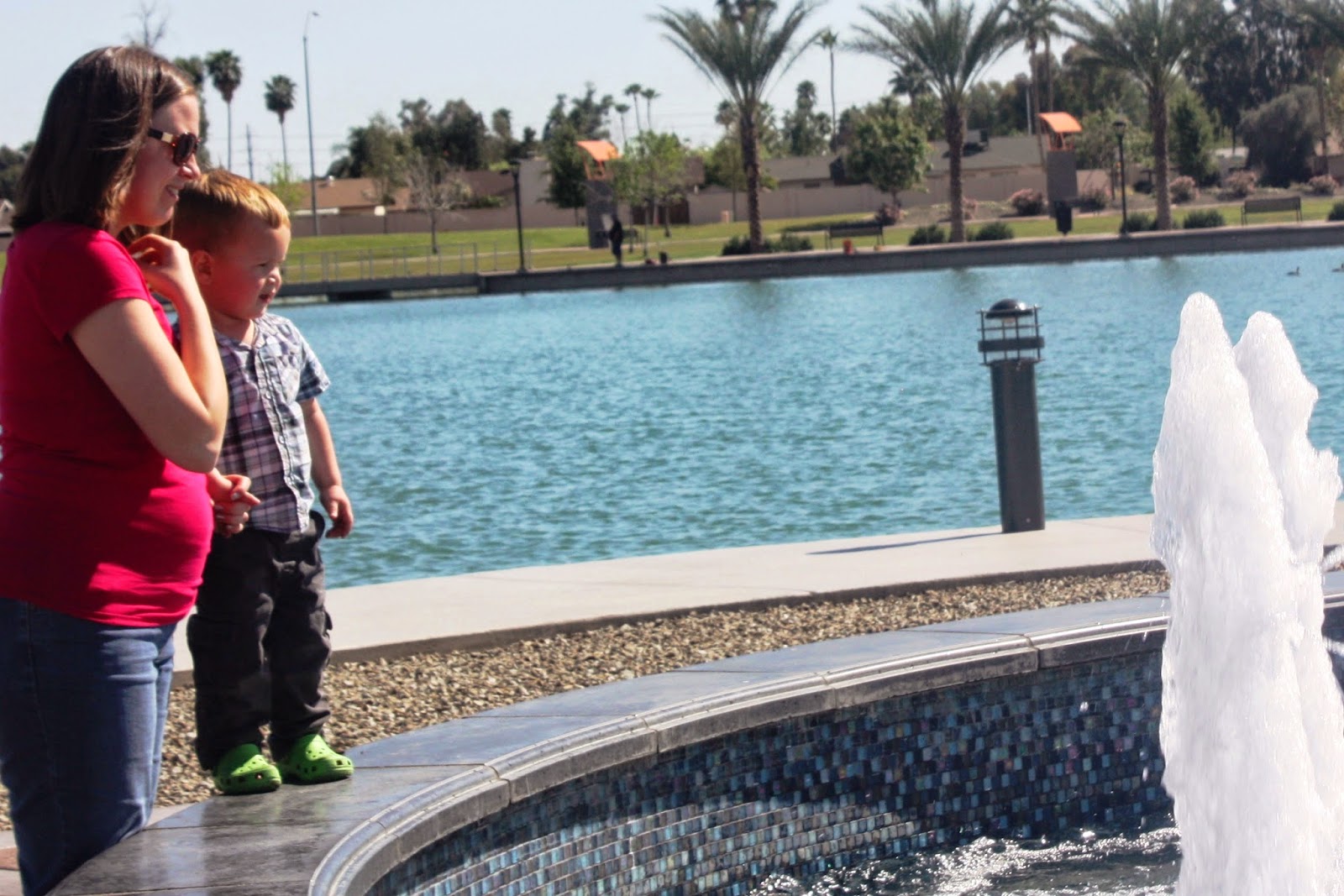 and played some more.   Timothy can make this go around all on his own!  (that is impressive) 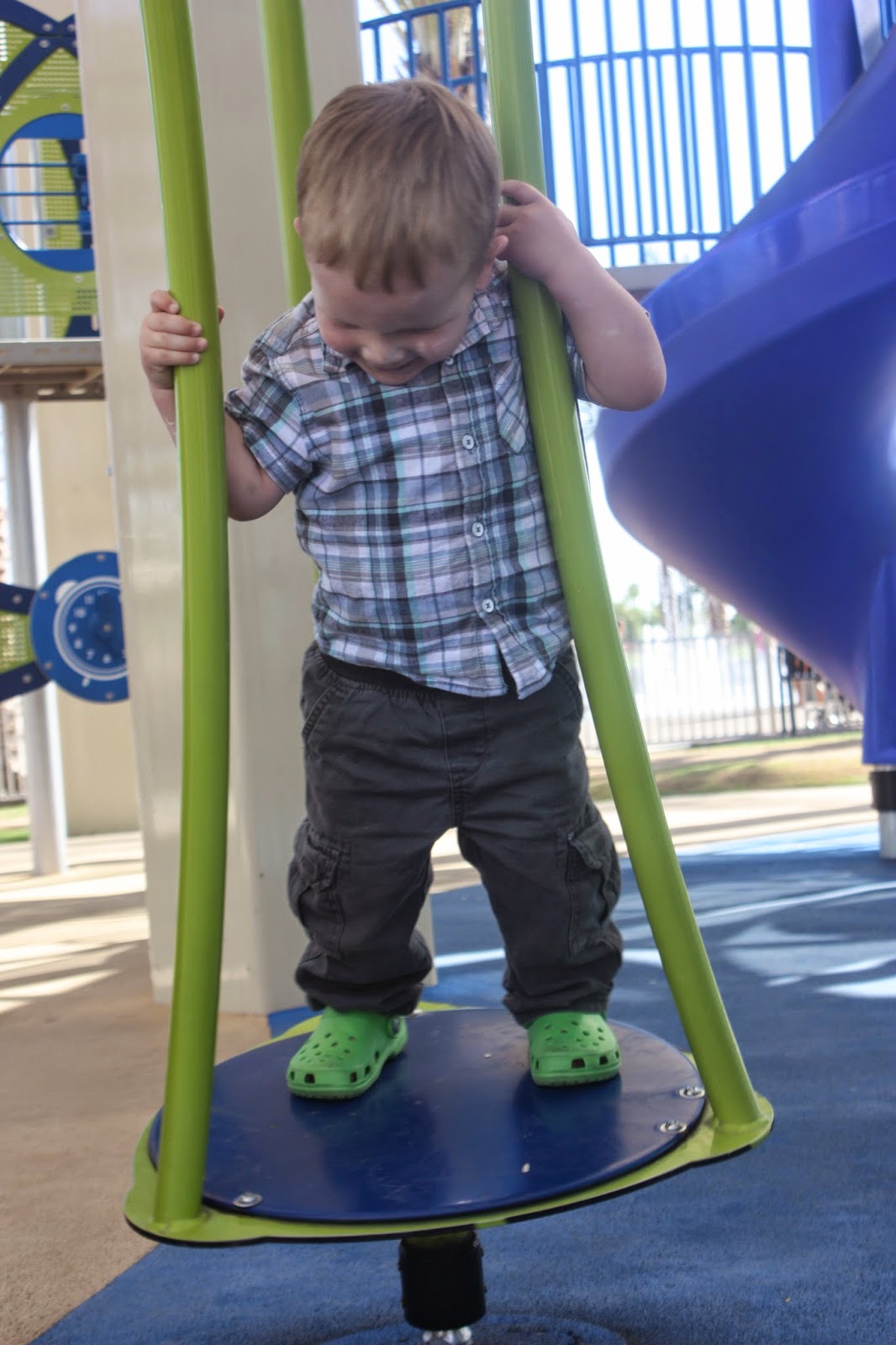 Speaking of impressive.... here is a decent picture of four, hot, tired kids on a moving swing. 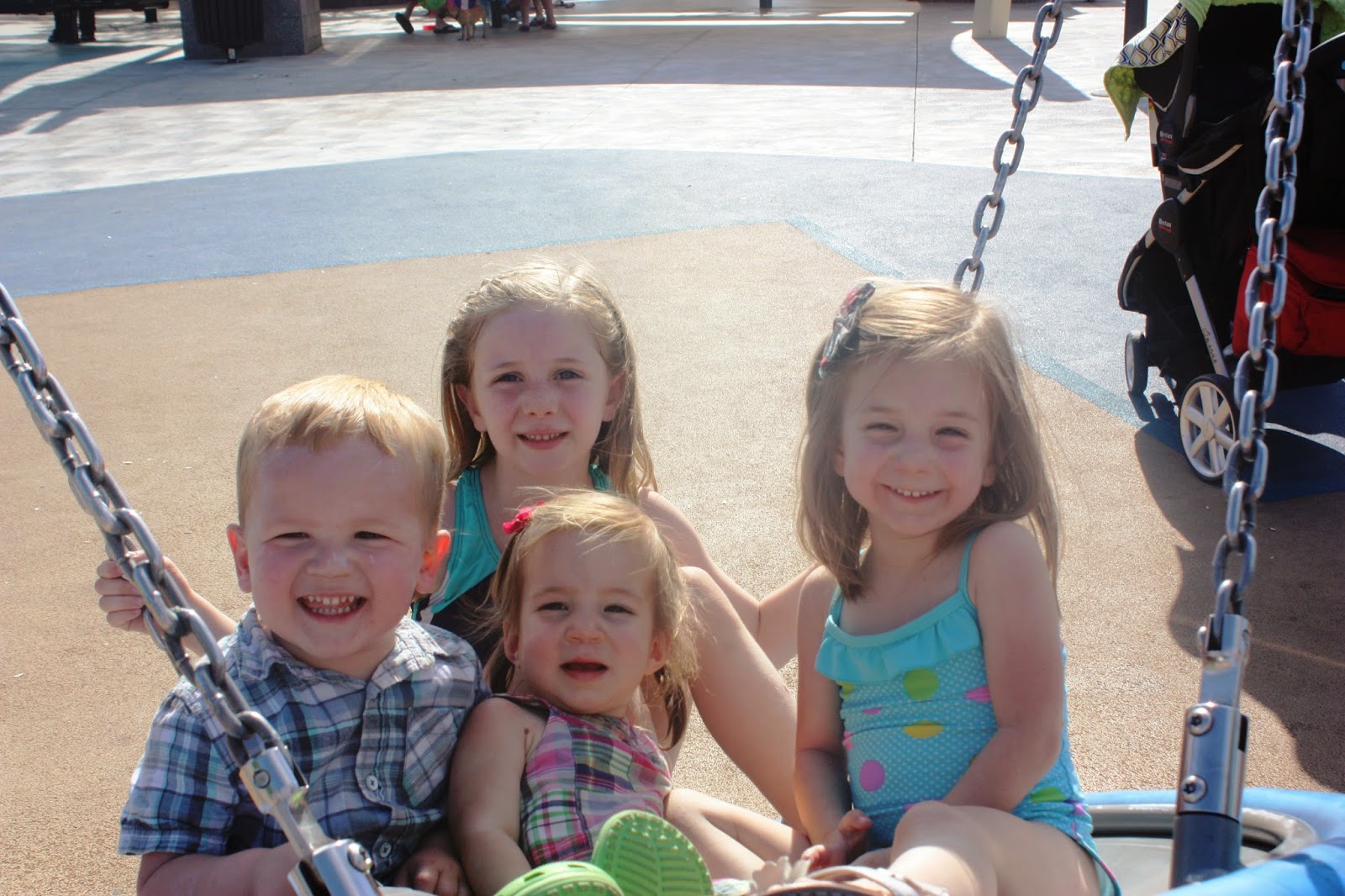 Josiah was there too! He slept and ate and was a good little baby. 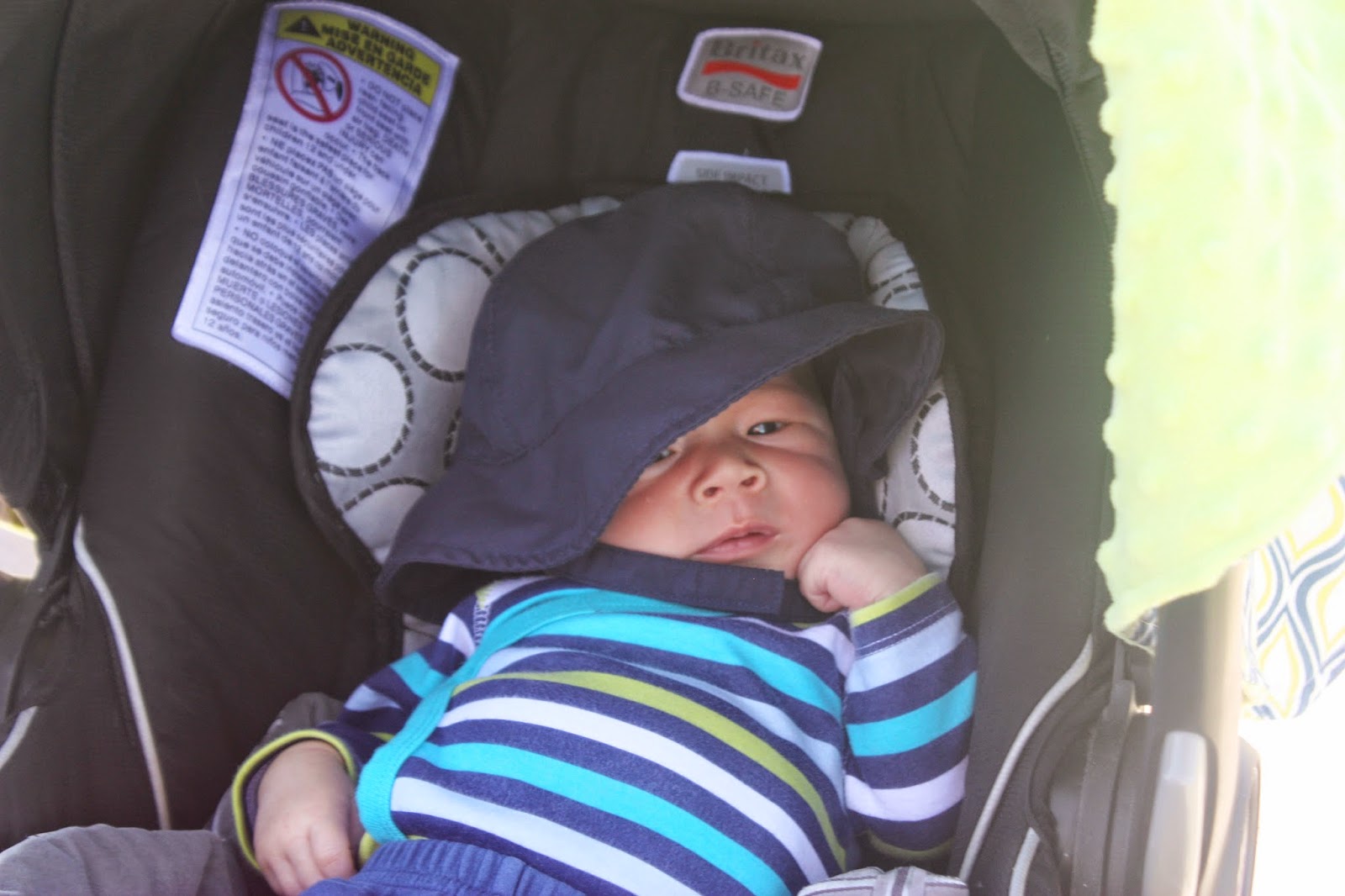 Posted by Kathleen at 8:24 AM No comments:

Last week was Claire's first week of basketball.   I very much hope
that one day she will be able to play for the EVAC team, just like I did
in high school so we are getting her started young.  Hopefully she'll
be better than I was when she hits junior high! 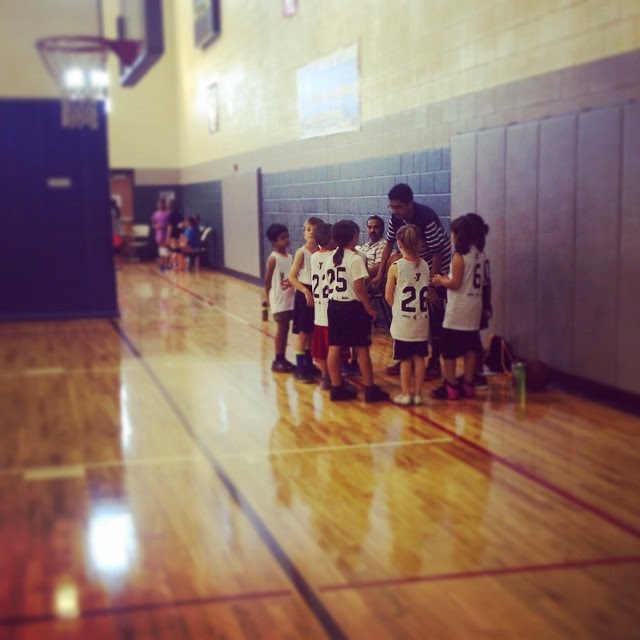 Up to this point, Claire had only played half court so having two baskets was confusing - especially because she didn't understand that each team only shoots at one of those baskets.   Claire has a great shot and made a basket!  Unfortunately it was on the other teams hoop but that's okay!
Only 8 baskets were scored the entire game and her's was one of them!

Also,  she had never guarded someone before and no one explained to her (because I didn't know) that YMCA gives each team member a different colored bracelet and it will match someone's on the opposing team.  Before the game starts they meet in middle and match up their bracelets and whoever has your same color, is your man to guard.   A pretty good idea to keep the kids from quintuple-teaming the kid with the ball but it would have helped if the coach had told them this ahead of time.... or even after the game was under way.

Here is an example of the complete and utter lostness.

I am glad I took video so we could watch it afterward and I could explain (graciously!) to her about the wrist band thing and show her how she is not helping her team when she is prancing around at center court.  I am proud of her.  She took what I had to say well when we practiced later that day she was SO much more aware and felt much better about the whole thing.

She is usually pretty capable athletically so I think next weekend she'll do really well.

We recently found out that we have an park right near us that is a habitat for burrowing owls.
We went to go check it out last week with Josh.
The girls loved the owls.  We saw five of them.  Most run into their little pipe homes when we got close but this guy was brave and let us get close to him. 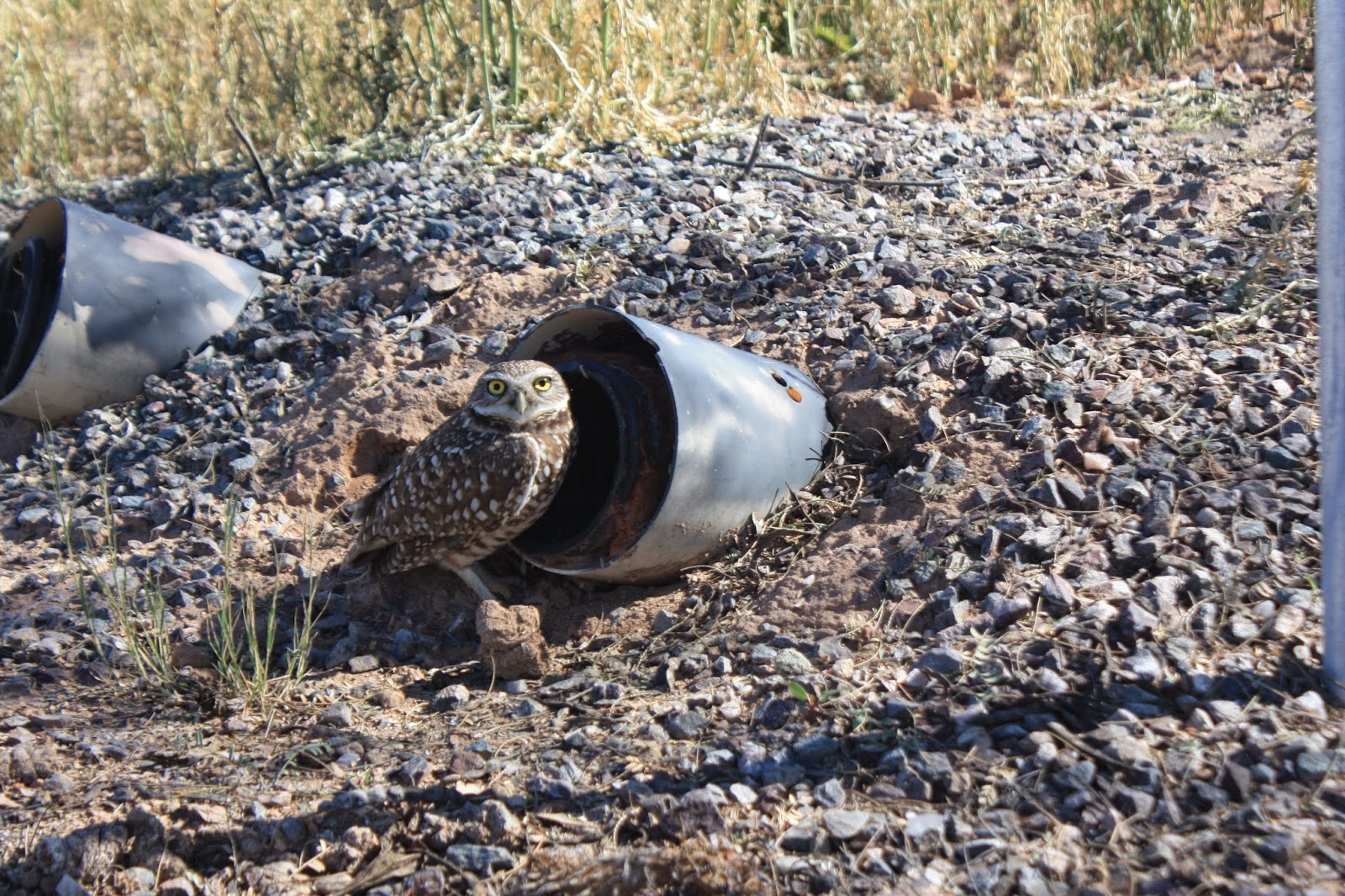 It's not an exciting park, just a walk way with rows of burrows and desert to walk around in.  The girls enjoyed picking flowers and putting them in their hair. 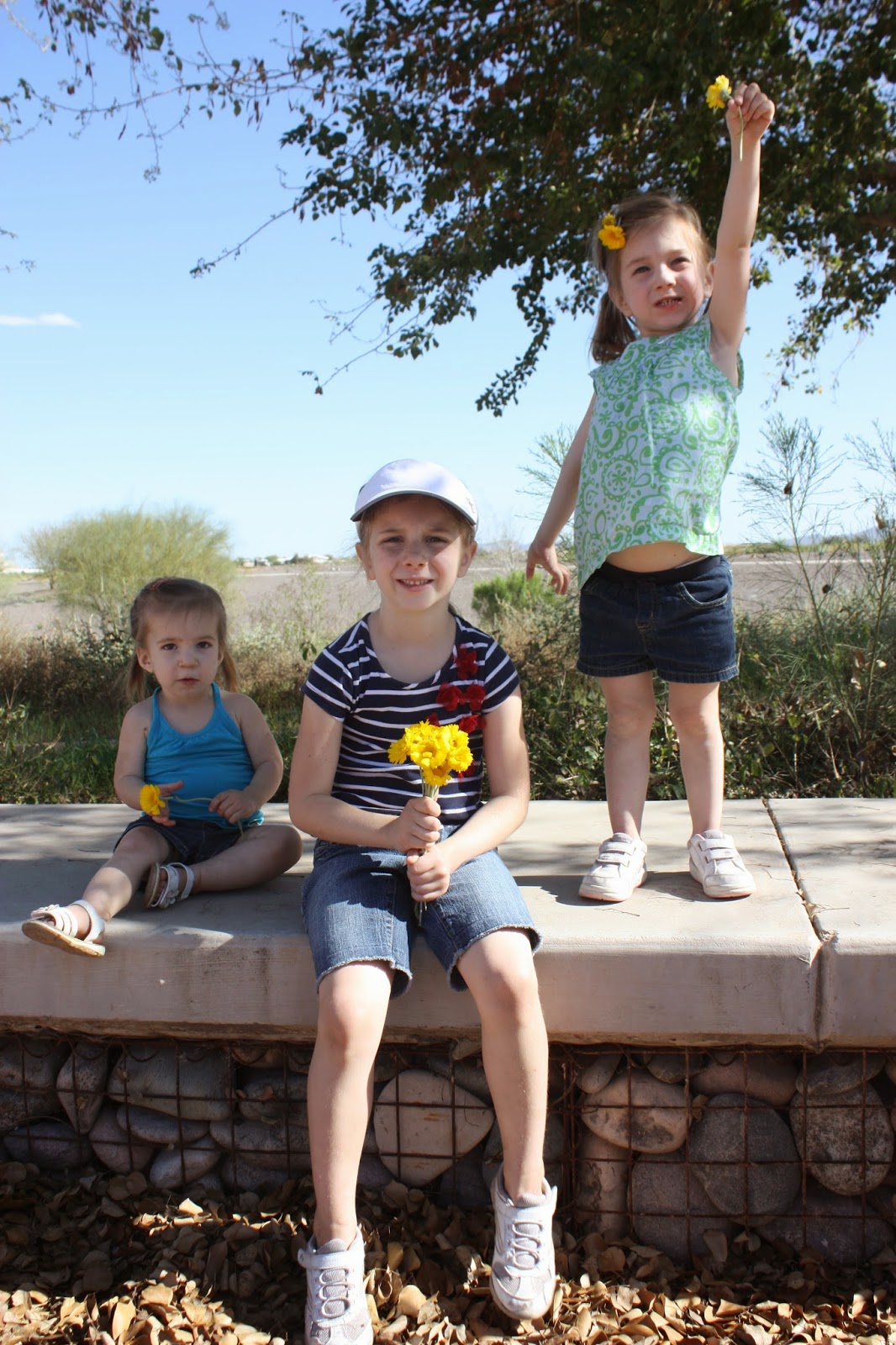 We also headed to Discovery Park again so Claire could give that bike hill another try.  She wasn't quite ready for it so she played frisbee with Josh 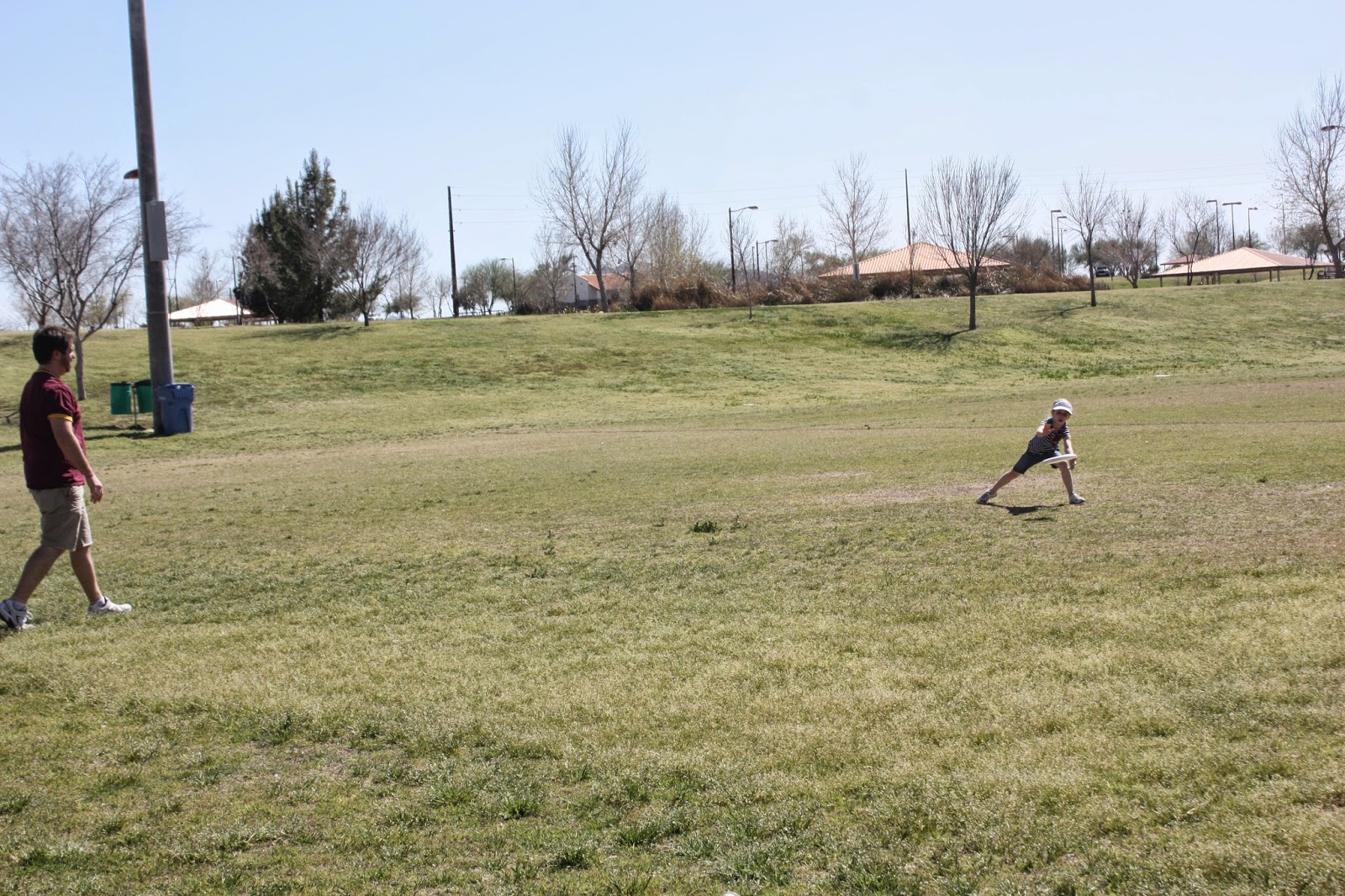 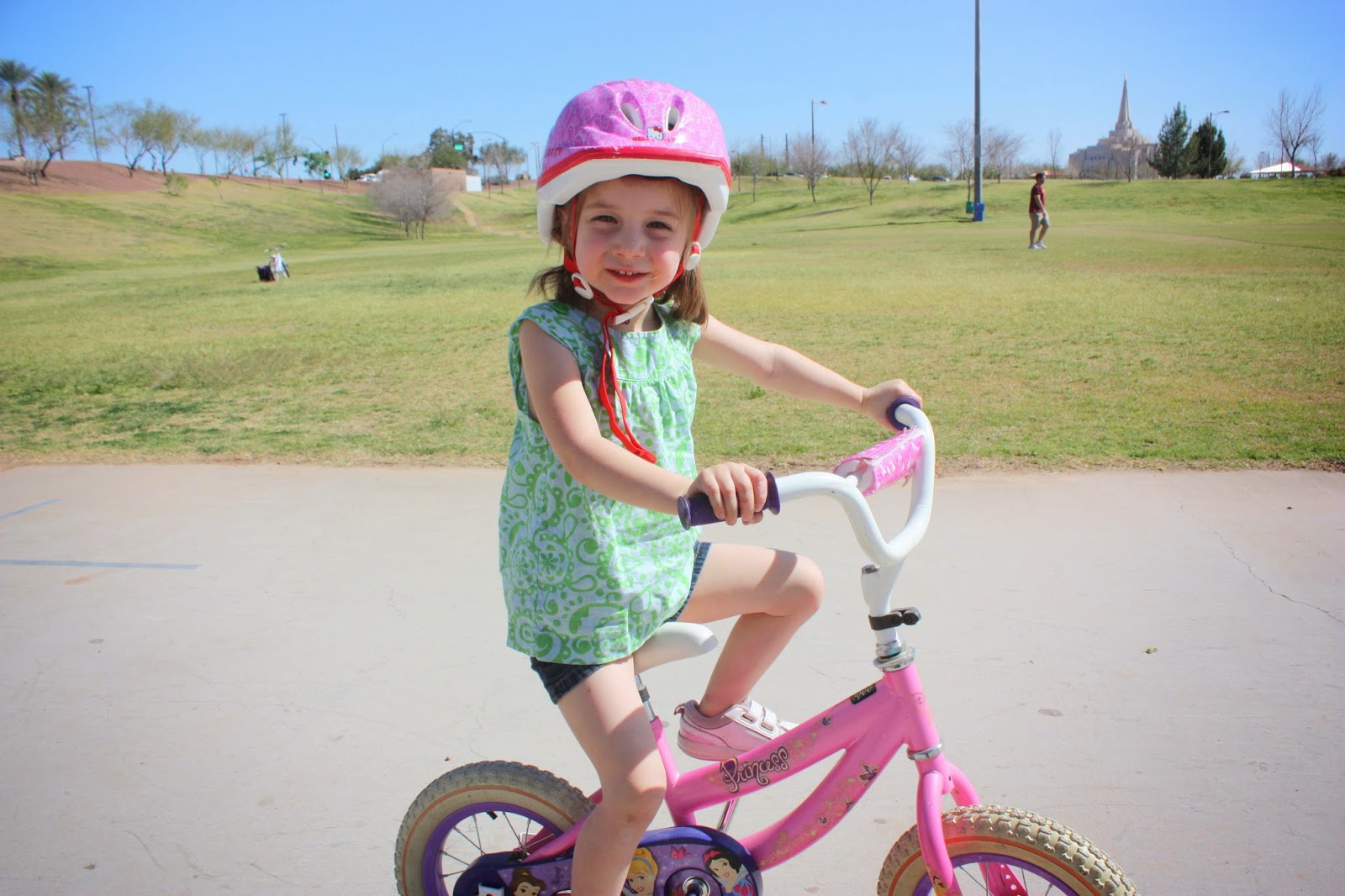 Paige wanted to play frisbee too. 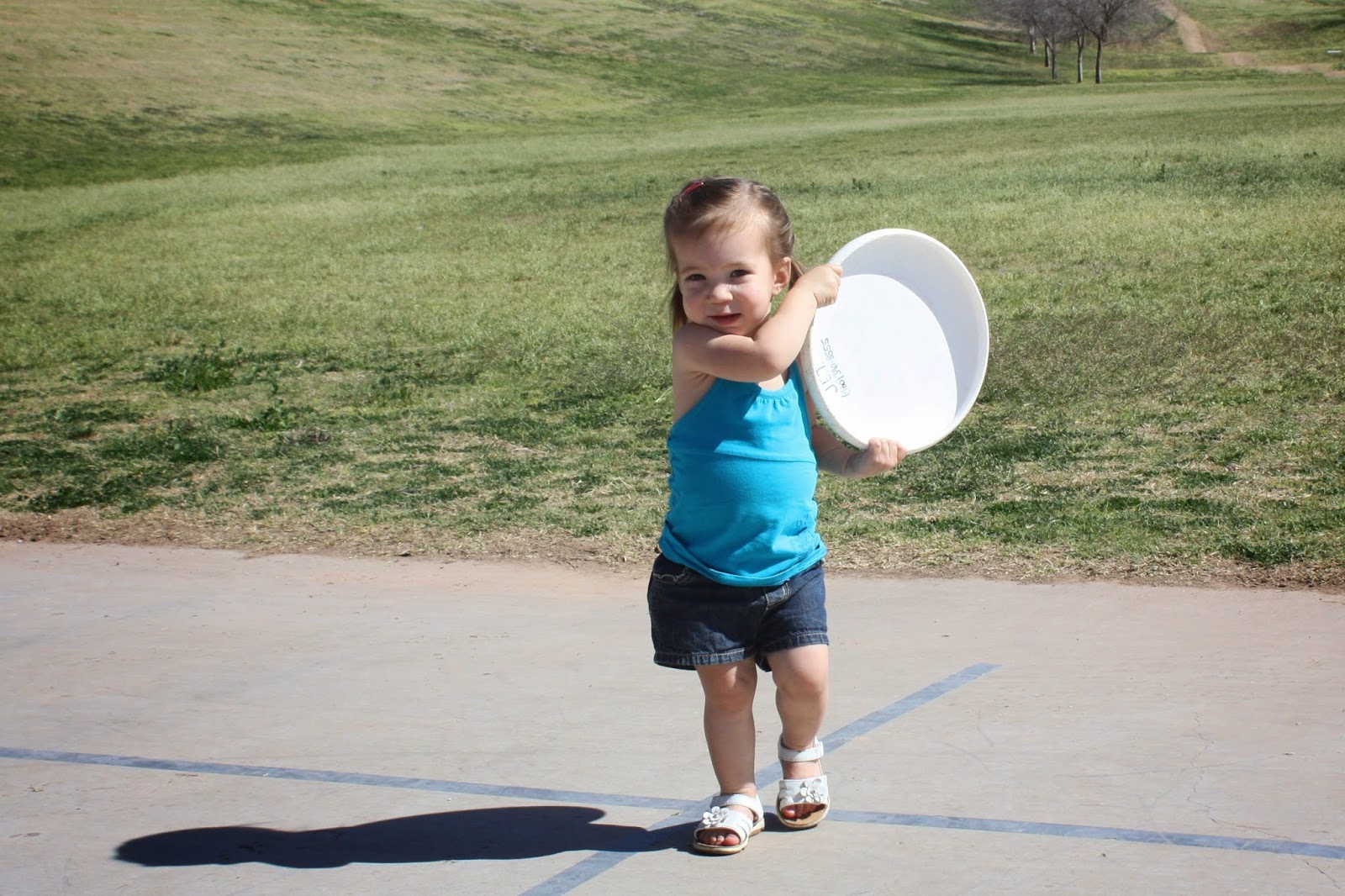 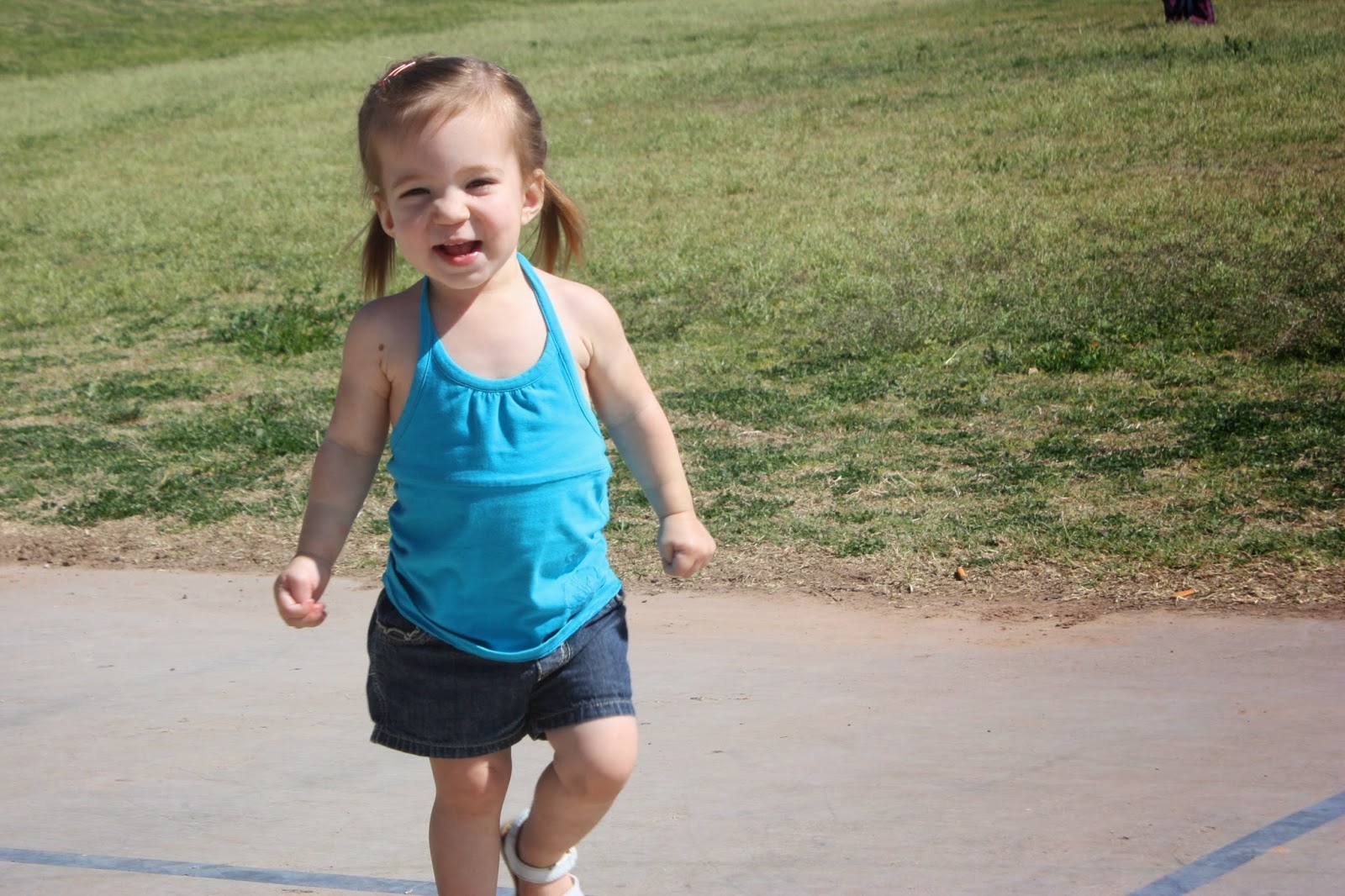 Posted by Kathleen at 4:39 PM No comments: